5 reasons why the U2-Apple deal is so brilliant 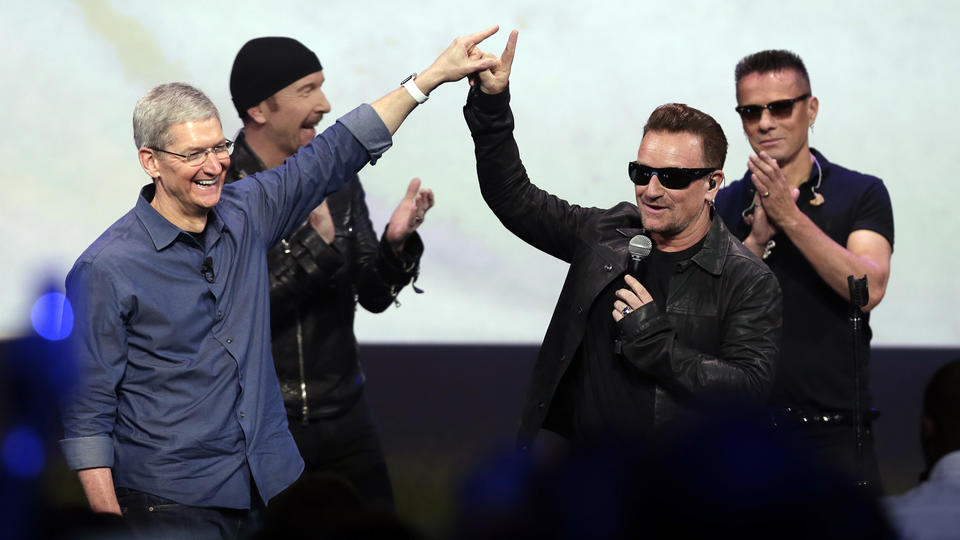 With all the media still buzzin’ about yesterdays announcement of bigger, better, brighter iPhones and the long awaited Apple Watch (is Apple dropping the i-theme?), I couldn’t stop grinning about the U2 surprise act. Such a brilliant move. Here are 5 reasons why:

1. U2 needed a gimmick
Let’s face it. These guys are still rocking and might very well be the best rockband ever, but they are on the edge of becoming the band from the past. They are not getting younger, you know. But just like Madonna manages to stay relevant in the pop music scene, U2 pulled it of too. Surprise album releases are hot. New income models, endorsements are hot. So with a single performance and a sweet deal, U2 is hot again.

2. iTunes needed a gimmick
And let’s face this too: iTunes is in a similar position. The music store from the past. Overtaken by Spotify at least in relevance and hipness, and now flanked by an annoyingly popular nephew called Beats. Last time I opened iTunes was… well today actually, to download the U2 album. But I did have to blow off some dust to be honest. The point being: it worked. I actually played some other music in iTunes too. Now quickly bring the UI into this century Apple, add streaming in Europe and we might be dating again.

3. Apple needed to rock again
Cook ain’t no jobs. And he doesn’t have to be, but Apple does need to rock. Music has been a part of Apple for ever and while Jobs was believable as a music lover, Cook just isn’t. He’s more of a wine person. So rock was sort of taking the back door. Out. U2 just brought it back.

4. Apple needed to give something back
I have lost count of the amount of money Apple is hoarding in the banks. With all the tax evasion tactics, it isn’t easy to sum all these bank accounts up, you know. Analysts say the numer is about $150 billion. That is 150.000 million US dollars. Just as a reference, the US has reserves of a bout $50 billion. So I think it was time that the drinks were on Apple this time. Why not give a round to everyone in the joint. Cheers!

5. It’s big business
U2’s best selling album was Joshua Tree which sold roughly 25 million copies (yes, those were the days;). With an album costing around $10 these days, assuming people still buy albums (which they are not) and that the new album would be equally successful (which it wouldn’t be), total sales would amount to $250 million. Take out the sales taxes and distribution costs (digital or physical) and you’re left with about $125 million. Take out some promotion costs and you’re left with roughly $100 million to be shared by the record company and the rockers.

So even if Apple decided to pay all that money in one big sweep (which I don’t think they would; they’re smart business guys), the cost to apple would be no more that 20 cents per iTunes user. So by gving away the equivalent of one single track’s margin, users receive the value of a whole album by one of the biggest bands in the world. Oh, and U2? They just released their most profitable album ever. Not bad in these days.