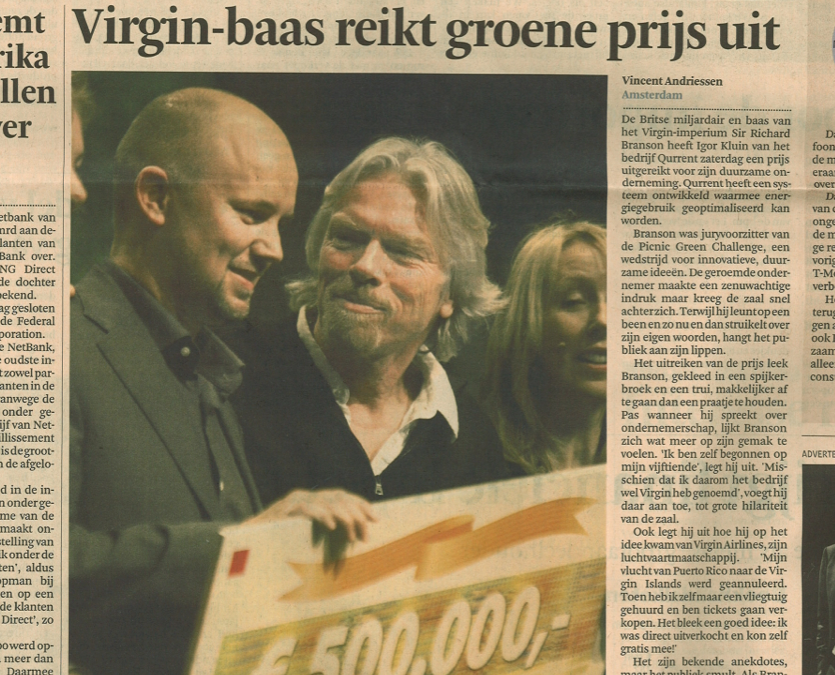 This is weird. Very, very weird…
One moment you’re writing a blog about a small company you just started. Next thing you know you’re writing one about leaving that very same company. Hacking away on my laptop, 2005 and 2013 feel as if they’re only weeks apart. However, the time has clearly come. It’s time for the next step.

I wouldn’t be surprised if most of the great stories I’ll be telling people when I’m old, would come from these past 8 years. The things I have seen and learned, the people I got to meet; they just don’t really fit 8 years. If only I had the patience, these stories might actually make for a nice little entrepreneurs handbook.

From my adventures travels to Iceland to the first investor, the second, the winning of the ‘Dragons Den’ at Holland Innovation, winning the Postcode Lottery Green Challenge, the high-five with Richard Branson, the evening newscasts and morning papers, The World Energy Summit in Abu Dhabi, a crazy business trip to South Africa, interviews, research programs, back on earth with the near-empty bank account, the would-be investors, the gold diggers, the slap in the face, the fans, the touchingly loyal supporters, the resistance, the wind in the back, the founding of informal lobby team ‘Local Renewable.now’, the ‘Green Business Ass’ press launch, the merger with DOEN’s ‘We Generate’, the Qrooz floating office and finally the Amsterdam headquarters… Trust me, this has been one spectacular journey!

And yet, I am leaving Qurrent. I am curious to learn where my next journey will lead me. When I had my first meetings in 2005 about ‘local renewable energy’, I was absolutely clueless and I had no idea who was important and who was not. It was great. In that year I called with professor Bragi Arnasson (also known as ‘Doctor Hydrogen’) at Reykjavik University. I barely knew what I was talking about and I used a very poor bluff to convince him to meet with me. I just had to meet this man and learn from him. A few weeks later I sat in his office (which also had a bed…) in Iceland. In awe I listened.

I want to start over. Again. I want to throw all I’ve learned and seen back into the hat and see what adventures I draw next. Discover new worlds. Discover a new me. And of course sustainability, politics, energy and fair trade will be part of that new journey; your not rid of me yet;) But will it be a company, an NGO, music, film…? Or maybe all of those things? The next few months will whisper it in my ear.

One thing that is already clear to me is that I want to be back at the helm. Ever since I left high school (and even before that…) I have always run my own companies; never really worked for a boss. And of course after the sale of Qurrent in 2011, I still gave both the company and renewable energy my best, but it slowly started to feel awkward. If you’re no longer the owner, running a company intuitively becomes harder and harder. Explaining your actions becomes core business. Governance structures and entrepreneurship just don’t gel so well; you trade passion for control. It’s unavoidable, so they say. All I know is that it makes me feel trapped. That is why I am going into space.

While I will be working for Qurrent for a few more weeks, I would like to use this opportunity to thank important people. Although I whish Qurrent would already have been bigger, I am still very proud of how far Qurrent has come. And this is all because of the team of extremely motivated people that helped built Qurrent with passion and loyalty over the last 8 years. Day in day out we worked to build a new, better and fairer energy world. And no, the work isn’t finished yet, but with both this team and the new shareholder in place I am convinced Qurrent is ready for the next phase.

It is a beautiful to see so many people work towards a shared dream. All of you, please do realize how unique this team and time is; you may never experience anything like it ever again. And last but not least I would like to thank the Postcode Lottery and DOEN foundation. Without their loyal support and belief Qurrent would never have come this far and I would have had far less interesting stories to tell;)

But above all, thank you, my dear and patient Marieke, Morven and Woody.
You give me space.